“A former northern Saskatchewan chief is accused of using his Band’s economic development money to purchase a vehicle over $25,000 in 2011. This was some of the evidence introduced on day one of the Napoleon Mercredi trial at Prince Albert Court of Queen’s Bench on Monday. Over $400,000 was allegedly misappropriated during Mercredi’s time as chief from September, 2009 to October, 2011.

“RCMP Cpl. Hugh Gordon, the officer in charge of the investigation, was the first Crown witness to testify. He claimed Mercredi personally collected over $60,000 of the Band’s economic development money.

“As per the arrangement between the federal government and ‘Prince Albert Grand Council’ (PAGC), Ottawa transfers a sum of money to PAGC, which then redirects funds to 12 member communities.
{Why does it go through their hands first?}

“When asked by Crown prosecutor Darren Howarth if he could find any evidence the money was being used according to eligibility requirements, Gordon replied “No”.

“When further questioned about the ‘Ford Expedition’ purchased from a Prince Albert dealership in 2011, Gordon said the bill of sale was made out to Mercredi, and as of 2015, the vehicle was still in his name.

“In total, Mercredi received over $776,000 in payments from the PAGC and the Fond Du Lac band during his time as chief. Not all of that amount is alleged to have been misappropriated. Mecredi’s annual salary as chief was $65,000. There were also travel expenses accounted for, including a five-day trip to attend the Canadian Country Music Awards {?} in Hamilton, Ontario.

“Mercredi sat calmy in court, listening intently to all the evidence presented and only looked down when jotting notes on a yellow pad of paper…”

“The alleged misappropriation of hundreds of thousands of dollars of Band money will be discussed over the course of a two-week trial…at Prince Albert Court of Queen’s Bench.

“Mercredi had applied to have the case against him dropped on the grounds it took too long for the court matters to proceed to trial from the time the charges were laid in 2015 but last May, a Queen’s Bench judge dismissed the application. Darren Howarth, the Crown prosecutor handling the case, had explained to paNOW at the time that the significant delay in the case was caused by defence counsel and cases cannot be thrown out due to delays by the defence…” 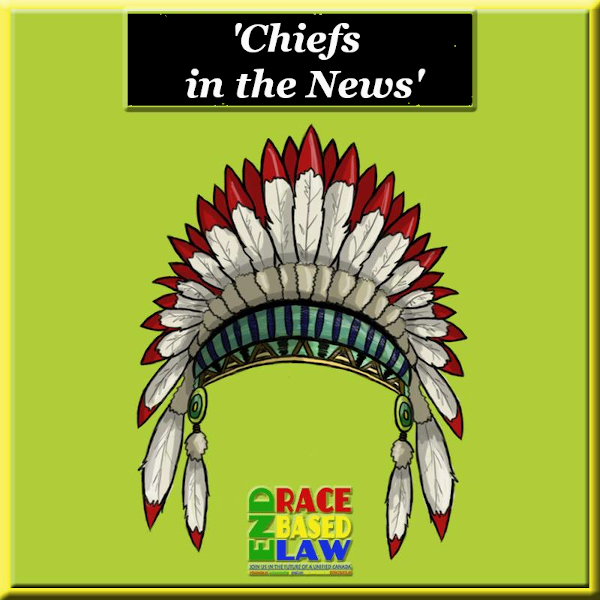 See also:
‘Another Chief In Trouble’ {Sept. 6, 2019}:
“The executive council of the Assembly of ‘First Nations’ {Indian Tribes} has suspended Nova Scotia-Newfoundland Regional Chief Morley Googoo following the release of a report outlining how he discriminated against Mi’kmaq women…”
https://endracebasedlaw.ca/2019/09/06/another-chief-in-trouble/

‘Calling Out Abuse’ {Oct. 12, 2018}:
“When our Inuit male leaders travel with their female staff, they think it’s a benefit and a perk that they can actually sexually harass, sexually assault or have relationships with women on the road“,
Iqaluit Mayor Madeleine Redfern told the House of Commons’ Status of Women committee…”
https://endracebasedlaw.ca/2018/10/12/calling-out-abuse/

‘The Tip Of The Iceberg?’ {September 4, 2018}:
“A former Nishnawbe Aski ‘Nation’ deputy grand chief is lobbing accusations of sexual harassment and intimidation at former grand chief Stan Beardy. Anna-Betty Achneepineskum, who was ousted from her elected post earlier this summer, claims seven people have come forward with statements against Beardy, who spent 12 years as grand chief from 2000 to 2012 and three more as Ontario regional chief.”
https://endracebasedlaw.ca/2018/09/04/the-tip-of-the-iceberg/