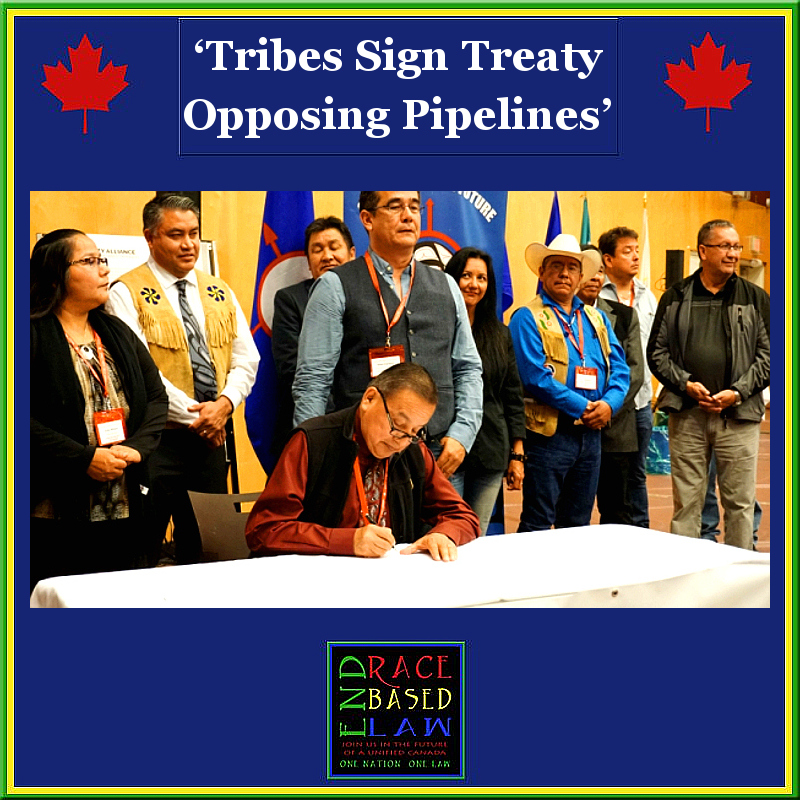 {A small minority of Chiefs from across North America FLEW into Montreal and Vancouver for the ‘treaty’ signing. But none of them pledged to stop using oil or oil-based products. And they all still want money from the rest of us, while offering to contribute exactly nothing…}

“The…Native American tribes from Atlantic Canada, Quebec, Ontario, the Prairies, British Columbia and the U.S. made the announcement in joint press conferences Thursday.

“Under the treaty, the signatory ‘First Nations’ would jointly oppose Kinder Morgan’s ‘Trans Mountain Pipeline’, Enbridge’s ‘Northern Gateway’ and ‘Line 3’ pipelines, along with TransCanada’s ‘Energy East’ pipeline and ‘Keystone XL’ pipeline which could face a resurrection following the outcome of November’s U.S. election.

“All the proposed pipelines would ship Alberta-mined bitumen to the West and East Coasts and down to the Gulf Coast.

“We have the ‘right’ {No, you don’t, you arrogant bully} and the responsibility to stop these major threats to {what are not} ‘our lands’, {not} ‘our waters’ and ‘our peoples’,”

said Kanesatake {Mohawk} Grand Chief Serge Simon, whose {crime-controlled} community is famously known for its central {and violent} role in the 1990 ‘Oka Crisis’.

{“I don’t think it’s a secret to anyone that…in Kanesatake society, there is a level of violence that is not found elsewhere.”

“For example, from Quebec, we will work with our ‘First Nation’ allies in B.C. {You are only ‘allies’ in your common racial hatred and extortion} to make sure that the ‘Kinder Morgan’ pipeline does not pass {regardless of what others want}, and we know they’ll help us do the same against ‘Energy East’.”

{Meanwhile, they have no energy substitute to contribute, nor do they have any suggestions on how to make up for the lost taxation revenue. Tribalism seems to have a very limited vision…}

“The recent temporary victory by the Standing Rock Sioux Tribe in South Dakota in their battle against the ‘Dakota Access Pipeline’ has emboldened ‘indigenous’ resistance to similar energy projects across the continent, said Grand Chief Stewart Phillip, president of the Union of B.C. Indian Chiefs. {Another fellow with nothing but criticism to contribute…}

“{Some} ‘Indigenous’ people have been standing up together ‘everywhere’ in the face of new destructive fossil fuel projects, with no better example than at Standing Rock,” said Phillip, in a statement. “We know that infrastructure that expands the ‘tar’ sands is both incompatible with reducing Canada’s emissions and completely irresponsible.”

“Standing Rock is also one of the signatories to the ‘treaty’.

“The ‘First Nations’ in Canada also want to send a message to the Liberal government of Prime Minister Justin Trudeau.

“We want to work with the Prime Minister and the government to develop a ‘sustainable’ economy that does not ‘marginalize’ ‘our people’,” said Assembly of Manitoba Chiefs Grand Chief Derek Nepinak, in a statement. “This is a time of ‘great spiritual awakening’ for ‘our peoples’ as we reinvigorate our ‘nations’ and ensure a better tomorrow for all.”

{Unfortunately, you don’t give a damn about the rest of Canadians…}

“They’re hoping the treaty will ‘protect them’ from energy companies and the government.”

{But the hypocrites are still driving trucks and snowmobiles – and still require subsidies from the rest of Canadians. They MUST start acting with some maturity…}

“The chiefs say the projects are a risk to the future of the environment and Canada’s economy must be set on a sustainable path. {This is coming from people who can’t even make the economies of their reserves function properly!}

“The treaty follows reports that Prime Minister Justin Trudeau will approve at least one pipeline within his first term – most likely Kinder Morgan.

“However, ‘Union of BC Indian Chiefs’ President Stewart Phillip says what the prime minister chooses to do will not deter the group.

“Philips claims this is like the anti-war and civil rights movements rolled into one. {His megalomania knows no bounds…}

“The risk is too great, the underlying issues of climate change and global warming are such, that the answer is ‘no’.”

{There has been NO warming in 18 years, you arrogant, barely-literate fool…}

“Grand Chief Stewart Phillip of the Union of BC Indian Chiefs, who also signed the document, said ‘indigenous’ people will no longer stand for dangerous projects on their territory that advance the threat of climate change…

“Based on our ‘sovereign’, ‘inherent’ right to self-determination, we have collectively decided that we will pick up our ‘sacred’ responsibilities to the land, waters, and people. We will come together in unity and solidarity to protect our territory from the predations of big oil interests, industry, and everything that represents.”

The ‘Treaty’:
“Therefore, our ‘Nations’ hereby join together under the present treaty to officially prohibit and to agree to collectively challenge and resist the use of our respective {ancestors former, surrendered} territories and coasts in connection with the expansion of the production of the Alberta ‘Tar’ Sands, including for the transport of such expanded production, whether by pipeline, rail or tanker.

“As ‘sovereign’ {not!} ‘indigenous’ ‘nations’, we enter this treaty pursuant to our {non-existent} ‘inherent legal authority’ and responsibility to protect our respective {ancestors former, surrendered} territories from threats to our lands, waters, air and climate, but we do so knowing full well that it is in the best interest of all peoples, both ‘indigenous’ and ‘non’-‘indigenous’ {DON’T SPEAK FOR US!}, to put a stop to the threat of ‘Tar’ Sands expansion.

“We wish to work in collaboration with all peoples and all governments in building a more equitable and sustainable future, one that will produce healthier and more prosperous communities across {fictional} ‘Turtle Island’ {Grow up!} and beyond, as well as preserve and protect our peoples’ way of life.”