Canada should launch a full inquiry into the overtly racist teachings of native studies, and white privilege.

We have been in a unique position here on our Facebook page, having heard from thousands of natives across Canada, mostly the youth because they are the Internet/computer/iphone generation, but also because they are emboldened with “Native Studies” and “White Privilege Studies”.

The result of this race based blame game, shallow, and even revisionist, history education has been disastrous, especially since they are too often woefully lacking in a more broad academic education. It’s created some of the most limited, tainted, biased, racist, mixed up, hate-filled dialogue anyone could hear.

This video clip is a tiny portion of what we get daily, so extrapolate, and know it comes from coast-to-coast, so it’s obvious it’s indoctrinated racism, and we want an inquiry. 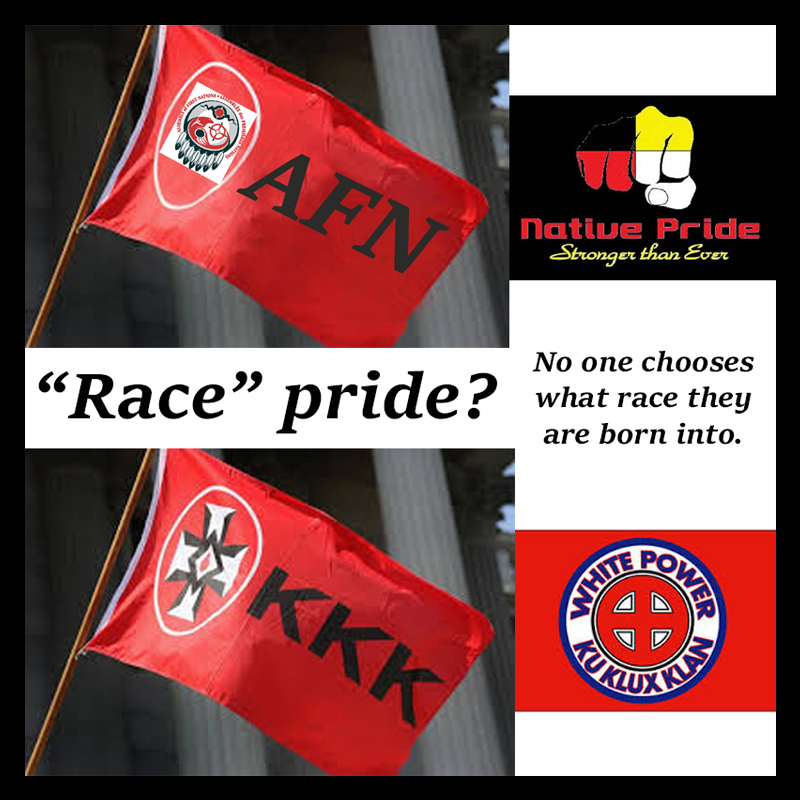 As I have said before, it’s unabashed, unashamed, unapologetic, unbridled, unprecedented racist dialogue, and absolutely NO ONE else would be able to pull it off, and yet no one will do a thing about this epidemic of native youth bullying innocent taxpayers who happen to not be their race.

I called it “Brown Shirtish” type bullying during “Idle No More” because it was. They were full on abusing, bullying and intimidating people, getting them fired, harassing them, you name it, gangs of them got involved and all egged each other on, and not even with the death threats did the CBC or any other media cover the true stories of what they were doing to people, all in the name of their race supremacy agendas, not letting any voice but their voice dominate, as they overpowered everyone online, calling them “KKK” “nazis” and “racists” when they were the ONLY people pushing their own “AFN” race agendas, telling everyone it was their land only, and we innocent taxpayers who are not their race, can “go home” if we don’t like it. We have all heard that so much, it’s a mantra in their dialogue.

Canada should launch a full inquiry into the overtly racist teachings of native studies, and white privilege. All it’s done is create divide and hatred, race blame and mistrust, anger and resentments, and no feelings of empathy for anyone but their race. It’s a mitigated disaster, and Canada has to ring some alarm bells.

The media HAVE to start to report on native hate speech, and call it was it is…racism.

Again I am asking….

-Take accountability for your racist blaming hate speech, and you’ll make friends easier. Or do you even want to?

-STOP telling anyone and everyone who is not your race to “GO HOME”. We are home, and we pay for land, native leaders don’t on reserves, so technically in this day and age, it’s more the payee’s land, than the people who did not pay for it. Stealing land is not cool, as you said so yourselves, and murdering others for it doesn’t count anymore. It’s a long history of moving around and land stealing back and forth between tribes, without true borders, mapping or central planning.

In our Canadian culture we pay for our land, so no one can come bully us off it, or they are not supposed to be able to.

So why do native youth get taught, and encouraged to come and bully people who are not their race, telling them it’s not their land, no matter how many hours they work and how much they sacrifice to own it, it won’t matter, because they were not born the right race?

This is the kind of thing Hitler talked about, race supremacy and how only the true German blood could own the land. Do not pretend you are against racism, if you stand by and don’t openly challenge the most racist dialogue going.

This is all translating into bullying industry, government, courts, and citizenship. It’s massive race bullying, and it’s being taught, and pushed onto their youth.

This is something we all have the right to insist they work on. Their racism is well known, but it has to be as big a story for them to work on, as they have made the missing and murdered women issue. It has to be as big as the campaign they start to quit drinking during pregnancy.

CALLING FOR AN INQUIRY INTO RACE BASED SUPREMACY TEACHINGS

Michele Tittler
ONE NATION, ONE LAW

PETITION TO
THE HOUSE OF COMMONS:

WE, the undersigned citizens of Canada,
draw the attention of the Government
of Canada to the following:

THAT whereas the Indian Act and Section 91(24)
of the Constitution Act, (1867)
have divided Canadians by race and heritage;
have perpetuated the unequal treatment of Canadian Indians,
providing the legal framework for segregation via the reserve system;
have prevented reserve Indians from equal provincial educational access;
have prevented reserve Indians from having the full legal, economic
and property rights and opportunities of other Canadian citizens;

AND whereas the inclusion of Sections 35
and 25 in the Constitution Act (1982) have divided
Canadians by race and heritage;
have disrupted legal commercial and exploration activities;
have introduced legal uncertainty into property ownership;
have left some Canadians without proper police protection,
as in Caledonia, Ont.;
and have left most Canadians with diminished rights
with every expansion of ‘indigenous rights’ based on Section 35;

AND whereas the inclusion of “with particular
attention to the circumstances of aboriginal offenders”
in Section 718.2(e) of the Criminal Code
(R.S.C., 1985, c. C-46)
has resulted in a two- tiered system of justice,
wherein Canadians receive different legal outcomes,
depending on their race/ethnic heritage;

AND whereas the United Nations
“Declaration on the Rights of Indigenous Peoples”
contains provisions that are fundamentally
incompatible
with Canada’s constitutional framework;

THEREFORE, your Petitioners call upon the
Government of Canada to take the following actions:

THE passage of the repeal of the Indian Act;

THE passage of the removal of “with particular
attention to the circumstances of aboriginal
offenders” in Section 718.2(e) of the
Criminal Code (R.S.C., 1985, c. C-46);

THE removal of Canada’s signature from the
United Nations “Declaration on the Rights of
Indigenous Peoples”;

THE active encouragement of the provincial
legislatures to do the same, or via provincial referenda;
and the calling of a federal/provincial Constitutional
conference to finalize these changes desired by
the people of Canada,
including setting a date for the
final termination of
Treaty and land claims submissions.

Please note this part is for information purposes
only and does not form any part of the Official Petition.

*Note that the pages must be free of erasures and
contain only original signatures and addresses written
directly onto the front AND also the back of the petition page.

The request contained in the Petition to
END RACE BASED LAW has been reviewed
by Richard Bernier, Procedural Clerk and
Clerk of Petitions, House of Commons,
and found to meet the official requirements.

Names will not be used in any way other than
for the purposes of this Petition conforming to
the requirements of the Canadian Government,
it is to be presented to the House of Commons.