Institutional racism continues to not only exist, but is expanding in Canada. One of its ugly manifestations is the segregated ‘reserve’ system; yet, whenever Canada attempts to move forward on this issue, it is stifled by reactionary tribal leadership:

“The Assembly of ‘First Nations’ regional Chief for Ontario blasted former ‘Liberal’ Prime Minister Jean Chretien for suggesting some northern ‘First Nations’ may have no other hope left except to move away.

“Chretien was in Ottawa…as a guest for the Senate swearing-in of seven new Senators, including Murray Sinclair, the former ‘chair’ of the {one-sided} ‘Truth and Reconciliation Commission’.

“What we see coming out of former Prime Minister Chretien is a ‘colonial narrative’,”

said A‘FN’ regional Chief Isadore Day {And what we have coming out of Chief Day is a ‘tribal narrative’}.

“Day said the land is intricately tied to ‘indigenous’ identity.

“To the point of Mr. Chretien, ‘First Nations’ will not leave their {immigrant ancestors former} homelands; we signed treaties {surrendering the rights to the land!},” said Day. “We’re bound to the principle of maintaining the honour on our side of the table {? Then stop lying about the Treaties – and start honouring YOUR end…} and we simply will not leave lands where we’ve been since ‘time immemorial’ {Then figure out how to survive! And stop pretending your ancestors weren’t immigrants, too…}.”

“Chretien said Tuesday that “sometimes” ‘First Nation’ communities need to be moved because “isolation” makes it difficult “to have economic activities in some of these areas”.

“Chretien was the Indian Affairs minister under former Prime Minister Pierre Trudeau who introduced the 1969 ‘White Paper’, which sought to wipe out the distinct {racist} legal status of “Indian” and absorb ‘First Nation’ people into the rest of Canadian society.

“The problem is, sometimes you cannot. You know, it’s — you know, people have to move sometimes,” said Chretien. “It’s desirable to stay if they want to stay, but it’s not always possible. So you cannot have a statement that is generic. You know it’s extremely difficult. It’s one case at a time. Some, and you know, and it’s difficult culturally for them all the time.”

“Ministers in the current ‘Liberal’ government tried to steer clear of Chretien’s comments, dodging questions on the issue from reporters on Parliament Hill on Wednesday, who highlighted the former prime minister made the statements on the same day the House of Commons held an emergency debate on ‘First Nation’ suicide.

“You know, history is history. You can’t change history,” said Fisheries Minister Hunter Tootoo, an Inuk politician who represents Nunavut. “You know you have to move forward.”

“When pressed on whether he thought Chretien should apologize or about the timing of the statement, Tootoo dodged.

“I think that the context probably wasn’t there,” said Bennett. “Everybody’s entitled to their opinion. My opinion and my job is to create the hope and the opportunities for those children.”

“It is just how some people think, there are always people in society who think like that,” said Ouellette. “Chretien is a very smart guy, he comes from certain way of thinking.”

“Ouellette said no matter what Chretien says, it won’t change the reality ‘indigenous identity’ is closely tied to the land.

“‘Indigenous’ spirituality is tightly wound around sacred places, where you are from, the land,” he said.”

“Ontario Health Minister Eric Hoskins travelled to the troubled James Bay community of Attawapiskat on Wednesday. After speaking with community leaders and youth about the reserve’s recent rash of suicide attempts, he told reporters the situation was “deeply upsetting” — but also said Attawapiskat’s “courage” in confronting its problems left him with a sense of hope.

“This is more or less how all officials are expected to react after visiting aboriginal reserves reeling from tragedy. It is not enough to lament the horrors on display. There must always be some ennobling sense of optimism that things will get better. The idea of hope — of human progress and redemption, even in the face of epic loss — is embedded in our optimistic Western liberal culture.

“In fact, there is little hope for Attawapiskat. Hoskins probably knows this as well as anybody. But a Canadian politician simply isn’t allowed to speak plain truths — not on this subject {It’s because none of them have the courage to show leadership on this issue that we are moving inexorably backwards…}. He has to pretend we can put in place some bright, shiny plan of action that will transform all our Attawapiskats into healthy, vibrant, productive communities.

“This is the giant institutionalized lie that sits at the heart of Canada’s official policy toward ‘First Nations’. The only politicians with the privilege to flout this dogma are those who are out of the game — such as Jean Chrétien, who flatly declared this week the people of Attawapiskat need to relocate.

“There is no economic base there for having jobs and so on,” he said. “And sometimes they have to move, like anybody else.”

“The Ontario government has announced plans to bring in 13 health-care workers to deal with Attawapiskat’s crisis, as well as 24-hour-a-day mental health care. On paper, that sounds like a useful solution. But I doubt it will accomplish much in the long run.

“When I visited Attawapiskat four years ago, one of my most depressing conversations was with the resident mental-health nurse, who complained that many patients never showed up for their scheduled meetings at the community’s modern, state-of-the-art government-built health clinic. People will sleep till noon, she told me — not just because of substance-abuse issues, but because they usually have no reason to get out of bed. Like many remote reserves, Attawapiskat is a welfare state with almost no real jobs.

“When residents did show up for their mental-health appointments, I learned, communication between caregiver and patient could be maddening. The whole enterprise of treating mental-health issues — of therapy, of deconstructing human relationships in clinical terms, of talking about one’s childhood and neuroses, of looking for hidden meanings in words, dreams and actions — is based on a particular kind of Freudian and post-Freudian vocabulary about the subconscious mind. These ideas often are completely alien to other cultures, including ‘First Nations’ cultures, which are more likely to see mental healing through the lens of collective non-verbal spiritual rituals. {Yes, but they can learn, as other cultures have…}

“I know two psychiatrists, a husband and wife, who some years ago travelled to a set of Hudson Bay aboriginal communities for several weeks to help train local mental-health counsellors. Like Attawapiskat, these reserves had experienced an epidemic of youth suicide attempts. These two doctors, who were used to the typical psychiatric challenges that present themselves in a large Canadian city, were shocked by what they saw.

“When we showed up, the first thing we did was try to find residents who could help us establish a (baseline) reference,” the wife told me. “So we asked the social worker on permanent assignment to help us identify a family that had no experience with alcoholism, suicide, child abuse or rape. She couldn’t think of a single example.”

“These psychiatrists began their meetings with locals in a spirit of warmth and trust. There was an exchange of gifts, and a dinner of Arctic char. But after that, things got more difficult.

“The problem was that you couldn’t say anything that might be considered a form of criticism, or humiliating,” the husband told me. “So, observations that in our culture would be readily accepted — like me pointing out that a man seemed depressed — was something that I wasn’t supposed to say. That makes communication and diagnosis very difficult.”

“One key insight I heard from this husband and wife — which I’d stumbled on during my trip to Attawapiskat and other James Bay reserves — was that women in these communities often seem more outgoing and open to dialogue than men. Typically, it is the women who staff the few available jobs at schools and health clinics. And, of course, it is the women who have the primary role in caring for small children. Which is to say: these mothers proudly exhibit a social function within their communities — no matter how poor or squalid that community may be.

“The men, on the other hand, often have no social function at all — a typical source of malaise in all welfare states. (In this narrow sense, the analogy between native reserves and inner-city communities holds up.) Generations ago, aboriginal men in this part of Canada would hunt seal or caribou and come back from the hunt as celebrated providers. But the old skills required to live off the land are either dead or dying — and they’re unnecessary to modern life, in any event. On a tour of Attawapiskat with a former ‘First Nations’ chief, I learned that local homeowners lacked even the basic skills to keep up a pre-fab home, which is why the government has to keep replacing the buildings. 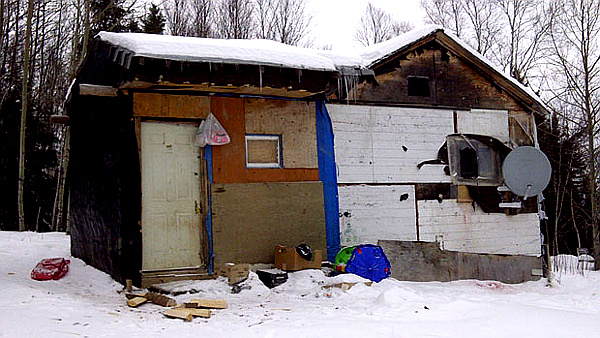 “I often hear that what is truly needed to bring remote ‘First Nations’ reserves up to a state of dignity, wealth and self-reliance is to resuscitate their old pre-contact culture. But ‘First Nations’ culture is more than a language or a set of spiritual rituals. It is the great constellation of skills, knowledge, lore and manners that animate a particular way of surviving within small kin groups of hunter-gathers — a way of surviving that started to go extinct once Canadian aboriginals began moving into modern houses and eating food out of cans. This is not a problem that can be remedied with more social workers or even more money. A community that has no sense of purpose will always be a hopeless place.

“In most communities that have no jobs, people pack up and relocate. Whole regions of Atlantic Canada have fallen prey to this cycle of creative destruction. So has much of Detroit. While this process is sad and disruptive, it pushes families to areas where they can make a living and exist in dignity. But the ‘Indian Act’ created a system that perversely discourages residents from leaving even the most appallingly impoverished reserves — without actually giving them any of the capitalist tools (such as the right to own private property) necessary to prosper. This paradox lies at the heart of the cruelty we have inflicted on aboriginal peoples. And it is why places such as Attawapiskat are doomed to exist in a hellish limbo.

“These are things that politicians aren’t allowed to say, because they go against the sunny, orthodox belief that the only thing holding back Canadian native communities is a lack of cash, sovereignty and cultural authenticity. In this way has our naive hope for native peoples produced the wreckage of Attawapiskat, and dozens of other hope-forsaken places like it.” 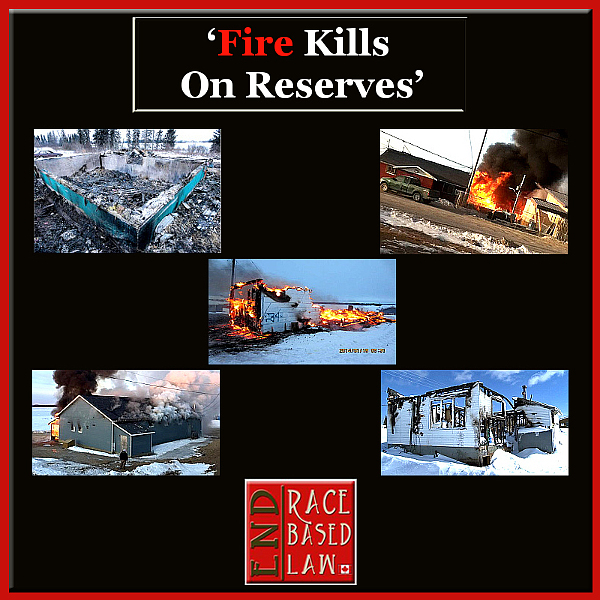