‘In Case You Missed It’ – From March, 2019:
“Prime Minister Justin Trudeau apologized for the way the Canadian government treated Inuit patients with tuberculosis in the 1940s, ’50s and ’60s {While ignoring all of the lives that were saved}…

From March, 2019:
“Prime Minister Justin Trudeau today apologized in Iqaluit for the federal policy on tuberculosis in the mid-20th century, calling it “colonial” and “purposeful” {?}, and saying the government knew it was taking a toll on Inuit.

“His speech in Iqaluit on Friday morning began by recognizing the various injustices Inuit were facing at the same time as the tuberculosis epidemic. These included the government identifying Inuit with numbers — on leather identification tags — instead of by their names, punishing children for speaking their Inuit languages, having their sled dogs teams killed by officials {which is fiction},
https://c2cjournal.ca/2019/09/canadas-sled-dog-apology-plumbs-new-depths-of-absurdity/
and moving them away from their homes to assert Canadian sovereignty.

“For too long, the government’s relationship with Inuit was one of double standards, and of unfair, unequal treatment“,
he said.
“Canada must carry that guilt and that shame. We are sorry for forcing you from your families, for not showing you the respect and care you deserved. We are sorry for your pain. The racism and discrimination that Inuit faced, was, and always will be, unacceptable.”

…
“Marie Speakman, who’s from Deline, N.W.T., says it feels like a “slap in the face” that Trudeau is only apologizing to Inuit, who she calls her “brothers and sisters“.

“The Dene people and the Inuit people have all gone through so much and so many types of trauma and abuse from residential school, to day school, to the Indian hospitals where they sent people with TB“,
{Should they have been left home to suffer and die?}
she said.
“So I think an apology should not be one certain group. You know we were all affected.”

‘Two sides to every story’
“Last week, we saw our PM apologize to the Inuit for the way some of their people were treated “Down South“.

“My dear friend, Harry Rusk, a pure blood Indian, was diagnosed with Tuberculosis in 1949 and was taken to the Charles Camsell Hospital for treatment. At the time, there was no cure for TB. The only treatment that worked was good nutrition and rest. If you did not go south for treatment of TB, you died. Harry is alive today only because he was taken away from his family, on very short notice, and flown from Ft Nelson, BC, to Edmonton in a DC-3. Harry lost his brother, father and mother to TB.

“Harry spent 4 long years in the Camsell, and was not expected to live, but he beat all the odds. He continued his education while at the Camsell. He wrote letters home to his mom.

“Yes, patients died. Harry was friendly with the man in charge of burying the dead. He told Harry that the bodies were properly dressed and always treated with the utmost respect, including being placed gently in the grave.

“Last week, we heard that there was no communication from the hospitals to the families up north. At the Camsell. Rev. Rheaume used a tape recorder to record patients’ messages to the families back home, and these messages were aired on ‘CBC North’, once a month. Harry’s mother heard at least two of his messages on the radio. It may not have been perfect, but both mother and son were happy for the opportunity.

“While at the Camsell, patients who were mobile were able to learn a trade. Harry shared stories of how one friend learned how to be a barber, An Inuit patient learned how to become a radio operator, and another friend left, and eventually became Chief of the Sarcee Tribe west of Calgary.

“Harry met Hank Snow while at the Camsell, and was inspired to become a musician. After four long years, Harry walked out of the front doors of the Camsell, went back home, and did his best for the people around home. He became successful in many aspects of his growing life, but the most outstanding, to me is that Harry became an entertainer, playing and singing at dances, and on CFRN TV. Harry also performed on the Grand Ol Opry Stage in Nashville for many years, and has been inducted into the Country Music Hall of Fame and carries the title of “Preserver of Camsell Memorial Legacy“. Harry is now an ordained minister, and he shares the word of Jesus with his wife Gladys Rusk, via stories and music.

“My good friend, Amanda Rauch Veldhouse, has told me many times …
“John, there are almost always two sides to a story, and the truth lies somewhere in the middle“.

“Last week, Harry received a phone call from one of the nurses who treated him in the Camsell. In her late 80’s,she was in tears, asking why our PM was painting a picture of how horridly the medical staff treated the patients. Harry is a testimony to the more realistic side, that the medical staff always treated their TB patients with the utmost respect and care. In fact, many nurses stayed on after their shift ended at 3:30 to provide free lessons/company for the patients. Harry said he remembers many times when nurses would come back to help serve the supper meal, without pay, because another nurse had called in sick. Some nurses also returned after supper, again without pay, to play games or read to the patients. A big part of healing is being in a positive state of mind, and the nurses did their best to make this possible.

“Harry will be always thankful and grateful to all the outstanding doctors, nurses and staff of the former Camsell Hospital for their portion of his healing of TB during the 1949-53 eras; also, for providing new doors to a better life for him. Jesus surely picked the right teams as His tools to cure TB and other influenza.

“Harry recommends that instead of all the unnecessary political apologies (or, in conjunction with them), heartfelt appreciation should be extended to all the foregoing God-given hospital staff. They deserved every honor and respect. Their actions taught Harry that gladly giving to others is the key that opens doors to contentment and success.

“So, before you are quick to judge those who treated patients with TB, remember that many would not have survived, if they had not come Down South. Harry asked me to share his side of the story so that you can formulate your own judgement about what happened during the TB epidemic in the north, during the 40’s, 50’s,and 60’s…

“You can get a copy of the book ($10 plus postage) which supports Harry’s version of what happened by sending his wife Gladys Rusk a private message. Thank you for considering Harry’s side of the story.

“So far, the powers-that-be and the media have not been interested in Harry’s story because it is not sensational enough, so let’s share his side of the story to provide balance. Feel free to SHARE! (Ten thousand SHAREs in 72 hours. Thanks to all who SHARED!)” March 11, 2019
https://www.facebook.com/johnmyslicki/posts/10216547186704876
^^^^^^^^^^^^^^^^^^^^^^
COMMENTS: “This is not my story… It is Harry’s story, who is a full blood Slavey Indian. I only put Harry’s experience into words.”
^^^^^^^^^^^
“I’d like to read some more good stories of people helping the Inuit and our ‘Indians’. Those stories need to be shared, too.”
^^^^^^^^^^^
“As you stated, there are 3 sides to each story. Thank you for helping to provide the other side of the story. Often the less sensational are the more truthful…”
^^^^^^^^^^^
“Did Trudeau read this? Not likely.”
“Harry sent it to him TWICE…. no response.”
^^^^^^^^^^^
“I went to hear Harry Rusk in concert and loved his Music. So glad he lived through TB and has a positive and healthy outlook on life. Thanks to Harry Rusk and John Myslicki for this Story. I have heard other stories from folks that survived from those times of TB. So glad for that little scar on my arm from the 50’s and the traveling TB clinics from the past. Although TB is still with us today, and you still need to go for treatments, which because of Science are better than they were decades ago. It was a lonely time for ALL people that contracted the Disease and had to go OUT to the treatment centres, which included people from all races.”
^^^^^^^^^^^
“This proves just how immature our Prime Minister is, with no knowledge of North-West history.”
^^^^^^^^^^^
“No matter how flat you make the pancake….it always has two sides. 😊
I wonder who will be making apologies in the future for Trudeau’s idiocy today??”
^^^^^^^^^^^
“Why does Trudeau apologize on behalf of Canadians who were only trying to help sick people? I wish somebody would expose some good outcomes of the residential schools. Didn’t any natives get a good education and go on to a better life?”
^^^^^^^^^^^
“It is always too bad when someone, who wasn’t there, makes a bad situation worse than it was, through omission or exaggeration. Thank you for telling us the rest of story.” 🙂
^^^^^^^^^^^
“It is nice to hear the other side of the story.I was lucky to see Harry and Gladys Rusk perform last Sunday in Camrose AB.at the Bailey Theatre.”
^^^^^^^^^^^
“I don’t understand why the native patients are different from the non-native. I know several people who spent a long time at the “SAN”. It was the only treatment available for TB.”
^^^^^^^^^^^
“I have Harry’s book. It’s a very touching tribute to his care-givers.”
^^^^^^^^^^^
“Our PM is always looking for the worst. I’m glad the other side has been represented.”
^^^^^^^^^^^
“Thank you, Harry, for writing this. My Grandma was nursing at he Hospital these years and I just found a picture of her and one of her patients. She was an awesome lady and had such a good heart. Thank you for sharing…” 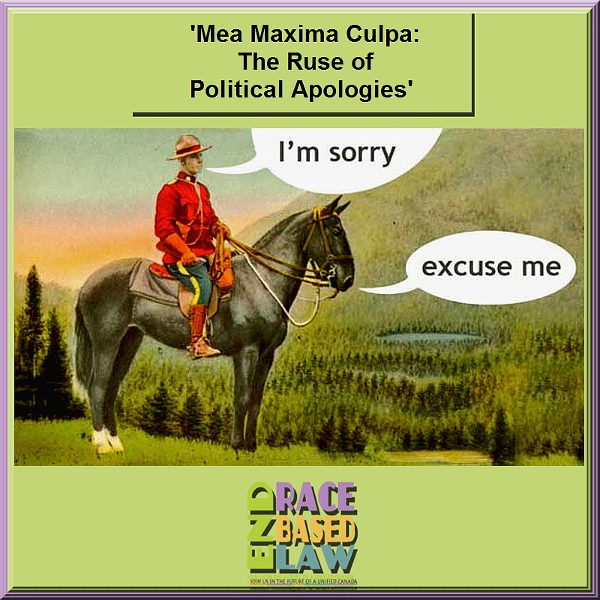 See also:
‘Mea Maxima Culpa: The Ruse of Political Apologies’:
“It all seems a little bizarre, and a reversal of normal morality, which is…that ‘those who do harm must pay’. Instead, we, who did no harm, must apologize publicly for something over which we had no control, and politicians — who stand to gain by appearing morally upright — are extracting money from millions of citizens who were not even alive at the time, using it to pay off descendants who have suffered no harm, and whose only connection to the deemed sins of the past is their blood.”
https://endracebasedlaw.wordpress.com/2016/02/05/mea-maxima-culpa-the-ruse-of-political-apologies/

‘Yet Another Apology’ {July 13, 2019}:
From the ‘Endless Apologies’ file:
“In an open letter published Friday, the leader of the Anglican Church of Canada apologized for its “cultural and spiritual arrogance” that caused harm to ‘indigenous’ {they mean ‘aboriginal’} peoples…”
https://endracebasedlaw.ca/2019/07/13/yet-another-apology/

‘Never Enough Apologies’ {June 18, 2019}:
The Premier was foolish to promise this in the first place. They already received $50 million for going to school, and a Prime Ministerial apology. ENOUGH apologies!