For years, the Anglican Church of Canada has been loudly and proudly proclaiming their support for ‘indigenous self-determination’. Now, ‘indigenous’ bishops in the church are refusing to go along with the church’s support for ‘same-sex’ marriage. They are trying to use their U.N.-created ‘Constitutional right’ to ‘Free, Prior and Informed Consent’ (FPIC) to either force the Anglican Church to reconsider, or create their own ‘self-determined’ ‘indigenous’ branch of the Church…

“The Anglican Church of Canada’s three ‘indigenous’ bishops have blasted their Church’s decision to approve, if only provisionally, changes to the marriage canon which would allow same-sex marriages…

“Following the July vote on same-sex marriages at General Synod…National ‘Indigenous’ Bishop Mark MacDonald, Bishop Lydia Mamakwa of the ‘Indigenous’ Spiritual Ministry of Mishamikoweesh, and Bishop Adam Halkett of Missinipi released a joint statement they say was requested by an ‘indigenous’ circle that met after the results of July’s vote were revealed.

“The bishops did say that while they did not speak for all ‘indigenous’ peoples, they said they consulted “broadly and deeply” with many who voiced displeasure both with the decision and the process by which it was made, and expressed desire for a more ‘self-determined’ {‘segregated’} ‘indigenous’ Anglican community in Canada.

“We do not agree with the decision and believe that it puts our communities in a difficult place in regards to our relation and community with the Anglican Church of Canada,” the bishops said.

“The bishops said they intended to discern their exact course of action “in the days ahead”, and committed themselves to continuing in their conversation

“with the Anglican Church of Canada in regards to ‘self-determination’ {‘segregation’} and mutual cooperation in our Anglican Christian ministry.”

“We will proceed towards ‘self-determination’ with all urgency,” they said.

“They said they would also

“seek ways to continue our conversation with the LGBTQ communities and individuals, affirming our earlier statements of love and welcome.”

“They were especially pained by the “silencing” of an elder during debate on the floor of synod, and called for an apology to the elder. {It seems that only aboriginal youth are allowed to silence an elder…}

“The Canadian Charter of Rights, the bishops said, guaranteed the Church’s right to “complete its pastoral work in marriages”, and also that the country’s ‘indigenous’ peoples are “self-determining with regard to basic cultural and social matters”. This guarantee, they said, is

“fundamental to the {fictitious} ‘Nation-to-nation’ relationship which is at the base of ‘indigenous’ {racial} rights, {one-sided} reconciliation and a promising future {?} for all of Canada.”

“These ‘rights’, they say, are also affirmed by the UN Declaration on the ‘Rights’ of ‘Indigenous’ Peoples (UND‘R’‘I’P). Given this, the bishops say,

“we are deeply disturbed and disappointed that so little attention was paid to our pastoral and social ‘self-determination’ and the ‘right’ to ‘free, prior and informed consent’.”

“That ‘indigenous’ people must give “free, prior and informed consent” to what is done on their {ancestors former} territory {Which means everything, everywhere…} is one of the principles of UND‘R’‘I’P.

“‘Indigenous’ Anglican elders, the bishops say, should have been “actively involved” with discussions to change the marriage canon. But neither discussion of the matter nor “This Holy Estate” — the report of the ‘Commission on the Marriage Canon’ — were translated into ‘indigenous’ languages, they said. {Of course not. You know how to read English, as your press releases clearly demonstrate…}

“The bishops said they voted against changing the marriage canon not as a statement against anyone, but as an expression of their own understanding of marriage — an understanding they say is closely tied to their concept of creation itself.

{It’s interesting that when Catholics tried the same argument during the legalization debate, they were ridiculed and then ignored, but our ‘inherent’ do-gooder racism means that aboriginals can say the same things and go unchallenged. There are far more Catholics than aboriginals in Canada…}

“The change to the canon, the bishops acknowledged, includes an “opt-in” clause, so that same-sex marriages would be permitted in a diocese only if authorized by the bishop. But they object to the changes made in the definition of marriage.

“Although the canon does not force anyone to do anything, the language of the revised canon changes the fundamental meaning of marriage to make it gender neutral,” the statement read. “This is both a significant and unacceptable change to our communities, who still find male and female as essential to their understanding of the marriage ceremony.”

“The three bishops concluded with this statement;

“We are deeply sad that, at a time in which the ‘indigenous’ and ‘non’-‘indigenous’ Peoples {The ‘indigenous’ racist duality} of the Anglican Church of Canada warmly embraced each other and a new future…we came to such divisiveness,” the bishops say…

The church – and government — brought this all upon themselves by their vocal encouragement of a racial worldview that sees ‘indigenous’ and ‘non’-‘indigenous’ as two distinct and separate species of humans. Not only is this biological nonsense, but it also has nothing to do with Christianity – unless they are still living in the 16th century…}

The Anglicans have not only forsaken all the decent people who lived and taught AT THE CHURCH’S BEHEST in the remote ‘Residential Schools’, but are now bending over backwards in an abject attempt at rewriting history:

“We affirm that God has a plan for us in the Gospel and that we must claim the freedom to become what God has called us to be. We believe that we must act now to reaffirm our ‘sovereign identity’ as the ‘people of the Land’… Empowered in faith, we will live and work to overcome the crisis that brings overwhelming death to the peoples of this land {?}…

“We know God is calling our peoples through our Elders’ Vision to renewal and restoration. With respect for our various traditional ways of living we hear God’s call to our peoples to unite as the renewed and restored peoples upon the Land. We will begin, today, to live towards a vision of ministry to ‘indigenous’ peoples throughout our native lands, many of us know as ‘Turtle Island’…”

“As partners in the worldwide Anglican Communion, Aboriginal Anglicans are members of the Anglican ‘Indigenous’ Network that reports to the Anglican Consultative Council…

“The ‘Indigenous’ Justice Working Group is a group of Aboriginal and ‘Non’-Aboriginal Anglicans who take on particular initiatives relating to ‘Aboriginal justice’. Here are some highlights from their ongoing work:

“‘First Nations’ Governance Act. During the federal government hearings in early 2004, ‘Indigenous’ Justice staff encouraged and facilitated Anglicans in various centres across the country to attend the hearings and speak in opposition to the proposed Act, which would have reduced the ‘First Nations’ to the same level of governance as municipalities {? What a ridiculous statement! These foolish people actually support racial Segregation and the dysfunctional reserve system!!}… 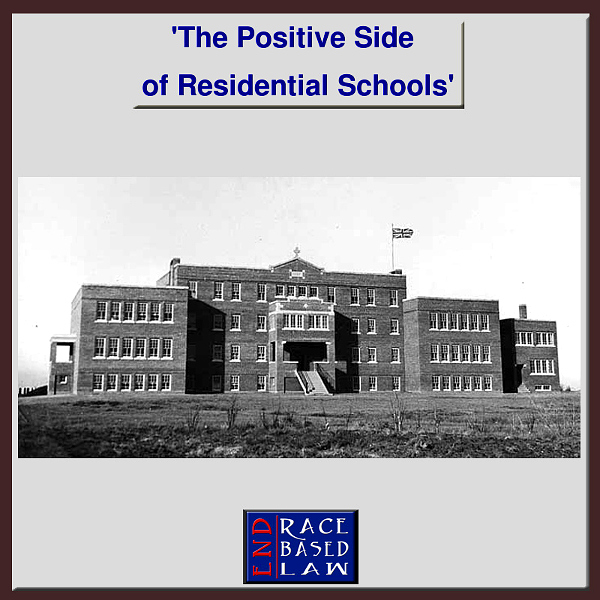 See also:
‘THE POSITIVE SIDE OF RESIDENTIAL SCHOOLS’:
http://endracebasedlaw.net/the-positive-side-of-residential-schools/