“…communities are at different stages in terms of their own ‘deconstruction’ or ‘decolonizing’”, said Wilson Raybould.

“That framework would work with ‘First Nations’ on a ‘Nation-to-nation’ basis {all 630-plus of them} and get out from under the ‘Indian Act’.

“Speaking on APTN’s ‘Nation to Nation’, Wilson-Raybould briefly outlined her plan after giving an impassioned speech during an emergency debate in the House of Commons on the crisis in the Cree community of Attawapiskat. There, she offered the first glimpse of the Liberal plan to abolish the Indian Act and emphasized the importance of “meaningful, substantive change.”

“There are no quick fixes to these issues”, said Wilson-Raybould.

“Wilson-Raybould talked about the importance of a long-term ‘reconciliation’ plan. She also addressed the need to move beyond the Indian Act and towards a ‘Nation to nation’ relationship.

“We need to ensure we breathe life into ‘section 35’ and that we complete the ‘unfinished business of Confederation’”, said Wilson-Raybould in her speech in the House of Commons.

“If we do so, we will have a strong and appropriate governance in ‘First Nation’ communities wherein they have moved beyond the Indian Act {Why will that guarantee any changes if the attitudes are still the same?}”, she said.

“On ‘Nation to Nation’, Wilson Raybould said the government will work with ‘First Nations’ who are ready to take on ‘self-governance’.

“Communities are at different places and we need to ensure that we have tools when a community is ready to move beyond the Indian Act in whole or in part that they’re ready to do so {Most aren’t…}”, said Wilson-Raybould.

“She said that this could be achieved in a variety of ways, from “sectoral government initiatives” to “bi-lateral self government agreements” to “comprehensively negotiating a treaty under the modern treaty process {All paid for by taxpayers…}”.

“Wilson-Raybould said it may not be a fast moving process {Well, it IS government, after all…}.

“Our efforts and how quickly we move will be determined by individual communities, by the will of the people who live in those communities and when communities are ready to do something substantive, which many {‘a few’} have already…they have a partner in Ottawa who is ready to pick up the ball and run with them”, said Wilson Raybould.

“A former deputy minister of ‘Indigenous’ Affairs said the government should be wary of putting the emphasis on action {Spoken like a ‘Sir Humphrey’!}.

“In a conversation with APTN’s ‘Nation to Nation’ online, Serson said the department’s insistence on results may have been at the cost of substantive change.

“(We) left all those more difficult, complex issues relating to ‘Nation to nation’ in abeyance and in the end, we never really got back to them”, said Serson.

“Now, he worries the current government will have the same problem.

“This emphasis on delivery of results, while good, leaves some of us concerned that once again we’re going to neglect these fundamental issues that have to be negotiated and debated around ‘Nation to nation’”, he said.

“I was happy to see that the Minister of Justice was renewing the call for that ‘Nation to nation’ relationship {Why would you support such segregationist idiocy???},” said Serson.

“That relationship will require the development of new frameworks alongside ‘indigenous’ leaders, according to Serson.

“If the federal government {‘Nation’} can develop some framework policies, then individual ‘nations’ can proceed at their own pace and their own priority to develop that ‘relationship’ that they are looking for {They are Canadian citizens!}”, he says.

“Still, he worries that despite Wilson-Raybould’s speech, the government is heading in a results-focused direction.

“It’s clear that from news reports and even the reports from the recent government retreat in Kananaskis, that the government wants to put an emphasis on results”, he said.

“According to Wilson Raybould, those results are not in the near future.

“The Indian Act will not be gotten rid of in one fell swoop … communities are at different stages in terms of their own ‘deconstruction’ or ‘decolonizing’”, said Wilson Raybould.”

–‘Justice minister says government will get rid of the Indian Act ‘one community at a time’,
Rachel Gilmore, APTN, April 29, 2016

‘Caledonia: A glimpse of aboriginal self-government’

“Rather than being an exceptional set of circumstances, the Caledonia debacle is a logical extension of the irresponsible encouragement of the unrealizable rhetoric of “aboriginal nationalism” and “sovereignty”.
^^^^^^^^^^^^^^^^^^^^^^^^^^^^^^^^^^^^^
“…Christie Blatchford has devoted a number of columns in the ‘Globe and Mail’ to the fiasco that is known as Caledonia…

“In these columns, Blatchford documents how citizens in the town of Caledonia were terrorized by a group of “Mohawk warriors” who were involved in a land claims dispute with the Ontario government. The reason for Blatchford’s column is a lawsuit initiated by two residents of Caledonia – Dave Brown and Dana Chatwell – against the Province of Ontario. Brown and Chatwell are suing the government for $7 million for failing to protect them from various forms of harassment, acts of vandalism, and threats of violence.

“While Blatchford justifiably focuses on the plight of Brown and Chatwell — and how their lives have been destroyed by the ‘Ontario Provincial Police’s failure to enforce the law — the case raises wider questions about the realization of demands for ‘aboriginal self-government’ in Canada.

“Rather than being an exceptional set of circumstances, the Caledonia debacle is a logical extension of the irresponsible encouragement of the unrealizable rhetoric of “aboriginal nationalism” and “sovereignty”.

“The argument underlying “aboriginal nationalism” and “sovereignty” is that Canadian laws should not apply to native groups. This is essentially the assumption that “Mohawk warriors” are operating under in Caledonia. These “warriors” consider themselves to be “sovereign” and, as a result, have erected barricades, carried out searches, imposed curfews, detained individuals, and issued their own “passports” – actions that are attempting to deny the existence of Canadian law and sovereignty (Canadian passports are recognized throughout the world, unlike Mohawk passports, which will never be perceived as legitimate by the international community).

“The ‘Ontario Provincial {‘Political’} Police’ has essentially accepted this state of affairs because it tacitly recognizes ‘aboriginal self-government’. The combination of the illegitimacy of Canadian law in the eyes of many native groups, and political pressure to avoid violent confrontations with aboriginal “warriors”, has resulted in lawlessness.

“Defenders of the “Mohawk warriors” will probably argue that aboriginal groups ‘have their own laws’, and ‘decolonization’ requires that this aspect of aboriginal culture be “recognized” and “respected”.

“What this view fails to acknowledge, however, is that LAW IS NOT AN ASPECT OF TRADITIONAL TRIBAL CULTURES. As was explained in “Disrobing the Aboriginal Industry” (pp. 115-18), and in my paper “The Political Economy of Aboriginal ‘Customary Law’”
( http://blogs.mtroyal.ca/fwiddowson/about/the-political-economy-of-aboriginal-customary-law-widdowson/ ), tribal groups are organized according to kinship, not legal rational authority, and this means that it is the will of the most powerful faction that prevails. No procedures or institutions have evolved to accommodate the different interests of rival factions.

“Liberal democratic principles such as ‘equality under the law’ and ‘the protection of individual rights and freedoms’ DO NOT EXIST in tribal societies.

“As most of the residents of Caledonia are not related by blood or marriage to the Mohawks of the “Six Nations”, there is no mechanism, or will, to ensure that they will be treated equitably under any regime of aboriginal self-government. If the claims of “aboriginal nationalism” and “sovereignty” are accepted in the rest of the country, similar catastrophic consequences are inevitable.” {!!!} 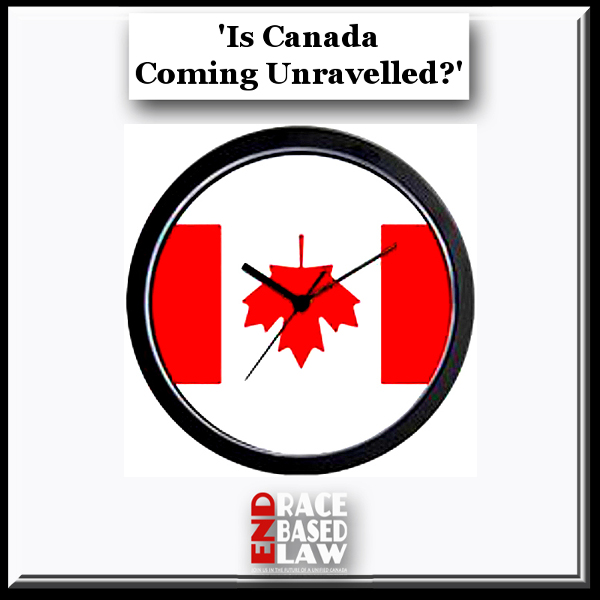 mail to:  endracebasedlawpetition@gmail.com
JOIN US IN THE FUTURE OF A UNIFIED CANADA