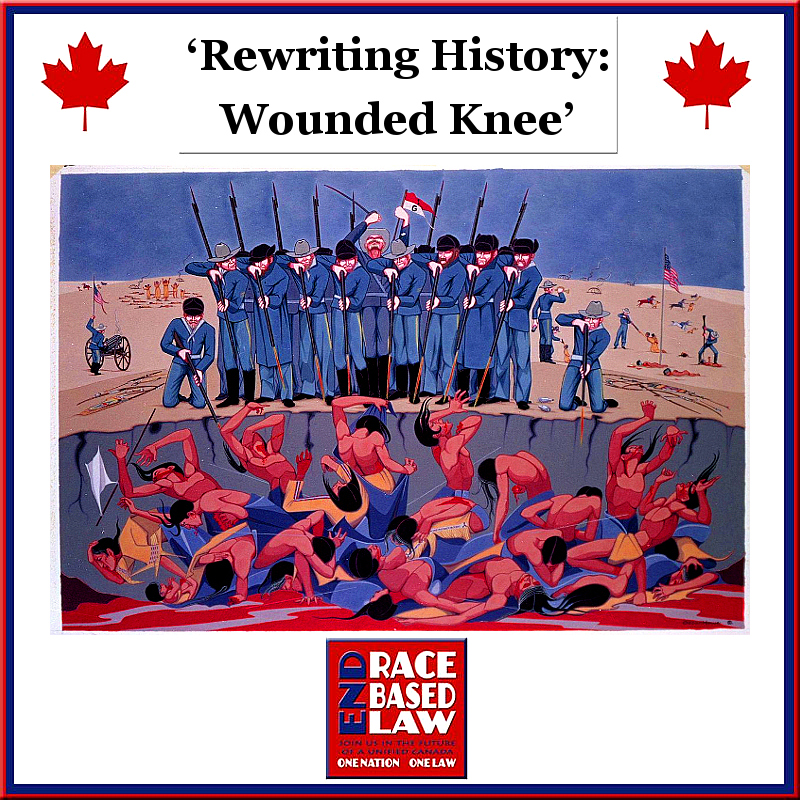 December 29th was the 126th anniversary of the Wounded Knee ‘Massacre’, an event that is being portrayed as similar to the Nazis lining up unarmed Jews alongside a ditch and executing them (As in the featured image). However, an eyewitness account tells quite a different story of the unfolding of this tragedy:

‘Eyewitness to a Massacre’
“Philip Wells was a mixed-blood Sioux who served as an interpreter for the Army. He later recounted what he saw that Monday morning:

“I was interpreting for Colonel Forsyth just before the battle of Wounded Knee, December 29, 1890. The captured Indians had been ordered to give up their arms, but Big Foot replied that his people had no arms.

“Forsyth said to me,

‘Tell Big Foot he says the Indians have no arms, yet yesterday they were well armed when they surrendered. He is deceiving me. Tell him he need have no fear in giving up his arms, as I wish to treat him kindly.’

‘They have no guns, except such as you have found.’

‘You are lying to me in return for my kindness.’

“During this time a medicine man, gaudily dressed and fantastically painted, executed the maneuvers of the Ghost Dance, raising and throwing dust into the air. He exclaimed ‘Ha! Ha!‘ as he did so, meaning he was about to do something terrible, and said, ‘I have lived long enough‘, meaning he would fight until he died.

“Turning to the young warriors who were squatted together, he said

‘Do not fear, but let your hearts be strong. Many soldiers are about us and have many bullets, but I am assured their bullets cannot penetrate us. The prairie is large, and their bullets will fly over the prairies and will not come toward us. If they do come toward us, they will float away like dust in the air.’

“I turned to Major Whitside and said, ‘That man is making mischief‘, and repeated what he had said.

“Whitside replied, ‘Go direct to Colonel Forsyth and tell him about it‘, which I did.

“Forsyth and I went to the circle of warriors where he told me to tell the medicine man to sit down and keep quiet, but he paid no attention to the order. Forsyth repeated the order. Big Foot’s brother-in-law answered, ‘He will sit down when he gets around the circle.’ When the medicine man came to the end of the circle, he squatted down.

‘There goes an Indian with a gun under his blanket!’

“Forsyth ordered him to take the gun from the Indian, which he did. Whitside then said to me,

‘Tell the Indians it is necessary that they be searched one at a time.’

“The young warriors paid no attention to what I told them. I heard someone on my left exclaim,

“I saw five or six young warriors cast off their blankets and pull guns out from under them and brandish them in the air. One of the warriors shot into the soldiers, who were ordered to fire into the Indians.

“I looked in the direction of the medicine man. He or some other medicine man approached to within three or four feet of me with a long cheese knife, ground to a sharp point and raised to stab me. He stabbed me during the melee and nearly cut off my nose. I held him off until I could swing my rifle to hit him, which I did. I shot and killed him in self-defense.

“Troop ‘K’ was drawn up between the tents of the women and children and the main body of the Indians, who had been summoned to deliver their arms. The Indians began firing into ‘Troop K’ to gain the canyon of Wounded Knee creek. In doing so, they exposed their women and children to their own fire.

“Captain Wallace was killed at this time while standing in front of his troops. A bullet, striking him in the forehead, plowed away the top of his head. I started to pull off my nose, which was hung by the skin, but Lieutenant Guy Preston shouted, ‘My God Man! Don’t do that! That can be saved.‘ He then led me away from the scene of the trouble.” 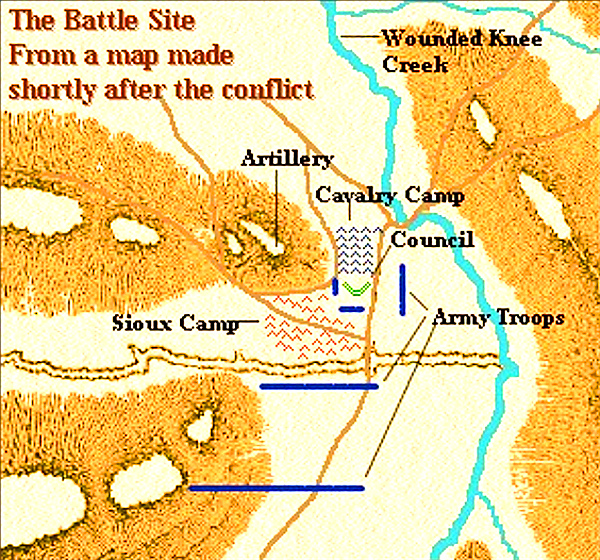 ‘The Background’
“On the morning of December 29, 1890, the Sioux chief Big Foot and some 350 of his followers camped on the banks of Wounded Knee creek. Surrounding their camp was a force of U.S. troops charged with the responsibility of arresting Big Foot and disarming his warriors. The scene was tense. Trouble had been brewing for months.

‘The hope of the Ghost Dance’
“The once-proud Sioux found their free-roaming life destroyed, the buffalo gone, themselves confined to reservations dependent on Indian Agents for their existence. In a desperate attempt to return to the days of their glory, many sought salvation in a new mysticism preached by a Paiute shaman called Wovoka. Emissaries from the Sioux in South Dakota traveled to Nevada to hear his words.

“Wovoka called himself the Messiah and prophesied that the dead would soon join the living in a world in which the Indians could live in the old way surrounded by plentiful game. A tidal wave of new soil would cover the earth, bury the whites, and restore the prairie.

“My brothers: I bring you word from your fathers, the Ghosts, that they are marching now to join you; led by the Messiah who came once on Earth to live with the White Man, but was killed by them. I bring to you the promise of a day in which there will be no White Man to lay his hand on the bridle of the Indian’s horse; when the Red Men of the prairie will rule the world.” –Wovoka
https://youtu.be/0EdRT56WK7Q

“To hasten the event, the Indians were to dance the ‘Ghost Dance’. Many dancers wore brightly-colored shirts emblazoned with images of eagles and buffaloes. These “Ghost Shirts” they believed would protect them from the Bluecoats’ bullets. 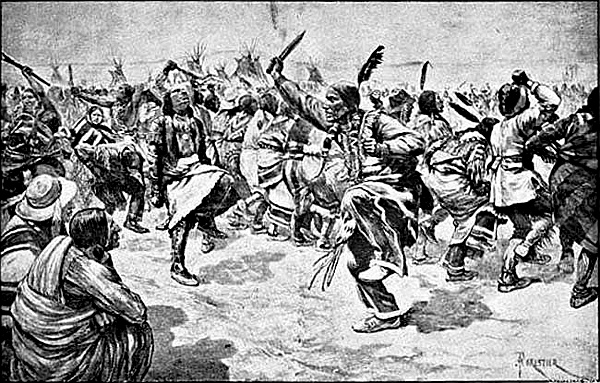 “During the fall of 1890, the Ghost Dance spread through the Sioux villages of the Dakota reservations, revitalizing the Indians and bringing fear to the whites. A desperate Indian Agent at Pine Ridge wired his superiors in Washington,

“Indians are dancing in the snow and are wild and crazy… We need protection and we need it now. The leaders should be arrested and confined at some military post until the matter is quieted, and this should be done now.”

“The order went out to arrest Chief Sitting Bull at the Standing Rock Reservation. Sitting Bull was killed in the attempt on December 15 {by his own people — Lakota police — when a gunfight erupted}. Chief Big Foot was next on the list.

“When he heard of Sitting Bull’s death, Big Foot led his people south to seek protection at the Pine Ridge Reservation. The army intercepted the band on December 28 and brought them to the edge of the Wounded Knee to camp. The next morning the chief, racked with pneumonia and dying, sat among his warriors and powwowed with the army officers.

“Suddenly, the sound of a shot pierced the early morning gloom. Within seconds, the charged atmosphere erupted as Indian braves scurried to retrieve their discarded rifles and troopers fired volley after volley into the Sioux camp. From the heights above, the army’s Hotchkiss guns raked the Indian teepees with grapeshot. Clouds of gun smoke filled the air as men, women and children scrambled for their lives. Many ran for a ravine next to the camp only to be cut down in a withering crossfire.

“When the smoke cleared and the shooting stopped, approximately 300 Sioux were dead, Big Foot among them. Twenty-five soldiers lost their lives. As the remaining troopers began the grim task of removing the dead, a blizzard swept in from the North. A few days later, they returned to complete the job. Scattered fighting continued, but the massacre at Wounded Knee effectively squelched the Ghost Dance movement and ended the Indian Wars.”

(How To Cite This Article:
“Massacre At Wounded Knee, 1890,” EyeWitness to History, http://www.eyewitnesstohistory.com (1998).) 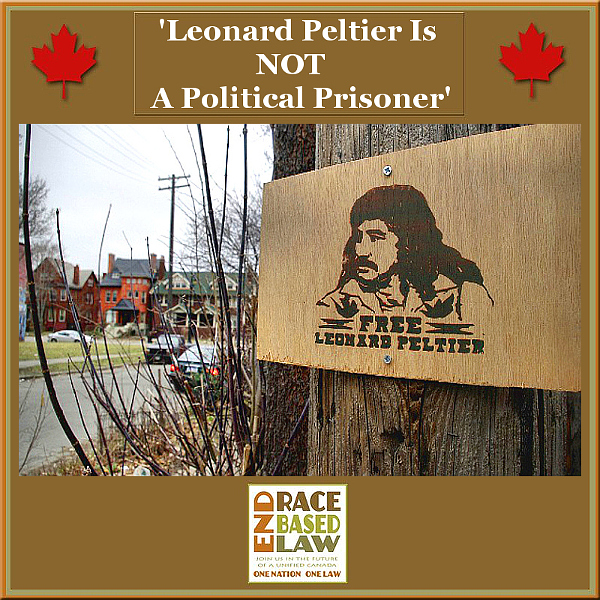 Mail to: endracebasedlawpetition@gmail.com
JOIN US IN THE FUTURE OF A UNIFIED CANADA